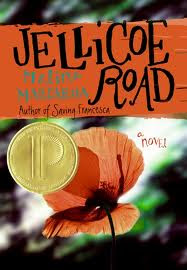 The Protagonist: Taylor Markham. Thanks to her experience at the Jellicoe School, her senior classmates elect her as the leader in the upcoming territory wars against town kids and military school Cadets - a position she doesn't particularly want. Still, she'll do the best job she can.
The Angst: When two figures from her past reappear at the same time the only person she's ever trusted disappears, she discovers that her own very mysterious history connects her not only to the tradition of the territory wars, but the people who started it 15 years ago.
Secondary Cast:Jonah Griggs: The leader of the military school Cadets, he and Taylor shared a revelatory experience years ago, but does anything of that sensitive, tormented boy remain in this violent, cunning opponent?

Raffaela: Taylor's second-in-command, and the closest thing to a friend she has.

Chaz Santangelo: The leader of the Townies, he grew up with Raffaela, with whom he shares a quasi-romantic history.

The Brigadier: This mysterious figure tracked down a younger Taylor and Jonah when they ran away from Jellicoe school, and now he's returned, and his unfathomable interest in Taylor seems as strong as ever.

Hannah: When Taylor's mother abandoned her, Hannah arrived to pick up the pieces. Taylor's relied on her ever since - until she mysteriously disappears.

Jessa: A younger student in Taylor's house, she continually dogs Taylor and tries to befriend her. Despite Taylor's rebuffs, Jessa and Taylor may share more in common than either of them realizes.

Angst Checklist:
The Word: It's interesting that the heroine's story begins when she wakes up out of a dream, because that's pretty much how the narrative of this novel is structured - the beginning of the story is bizarre and disorienting, with large gaps of information and backstory, and only slowly do pieces of the story start to come together one by one.

But with Jellicoe Road, that's kind of the point. The protagonist, Taylor Markham, has lived at the government-owned Jellicoe boarding school in Australia for five years, ever since her drug-addicted mother abandoned her at a 7-11 when she was a child. She has no family. She keeps to herself. The only person she really trusts is Hannah, the woman who rescued Taylor and volunteers for the school.

Then events start to unravel. First, the departing school seniors select Taylor as their new leader in the six-week-long territorial wars that have traditionally taken place between the students of the school, the kids from the nearby town (Townies), and the Cadets - the military school students who camp in the bush by Jellicoe property every September as an outdoor experience exercise.

Secondly, Hannah mysteriously vanishes, refusing to tell Taylor where she's gone or when she'll be back.

Thirdly, two people from Taylor's past reappear with the Cadets: Jonah Griggs, the troubled boy who helped her escape from Jellicoe School years ago only to betray her to the authorities, who is now the leader of the Cadets and her sworn enemy in the territory wars; and the mysterious, slightly sinister figure of the Brigadier, the man who caught up to Jonah and Taylor all those years ago and dragged them back.

All these events come together to force Taylor to confront the mystery of her past, a mystery that is somehow bound up in the fates of the five teenagers who started the tradition of the territory wars at Jellicoe more than 15 years ago.

It was very difficult and frustrating to get through this book at the beginning. The mystery and the constant allusions to things I had no knowledge of kept me at a distance from the story - I didn't understand the heroine or why she was voted leader or even what genre this book was (more on that in a bit). All I knew was that she didn't like or treat other people very well and yet everyone seemed to trust and expect a lot from her - which didn't seem to make sense.

That being said, as the bits and pieces of the narrative knit together, an emotional story emerges. The mystery is intended to delay the gratification of the reveal, but it's not a puzzle. Frankly, the main reason it's a mystery is because a surprisingly large number of people in Taylor's life believe in keeping her ignorant for her own good, and at several times in the book this came across as contrived. In terms of tone, I found it similar to (if not as good as) Lauren Myracle's Shine - while the ultimate conclusion is a positive one, it's built on a history of deep and terrible tragedy.

As the story unfolds, characters are unpeeled layer by layer. Taylor and Jonah Griggs start out unlikeable (and in Griggs' case, outright malevolent) but in their determination to uncover the secrets of the past they have to sacrifice more and more of their certainty and their emotional armour. Taylor's development is particularly rewarding. In a move that is metaphorically mirrored in the territory wars between the students, the Townies, and the Cadets, Taylor has to give ground in the small battles in order to succeed in the larger war. In this case, it means socializing, relying on her lieutenants and the students in her house, and surrendering her isolation to trust in other people, in order to learn more about the secrets a surprisingly large number of people are keeping about her life.

While this novel is primarily contemporary, the style of writing and the reveal of the mystery kept me wondering if there was a fantasy element. Several characters have seemingly prophetic dreams and speak to dead people, and there's the fact that a couple of characters are described and referred to by archetypal terms (the Brigadier and the Hermit, to name a few). There was definitely a mystical element to the mystery, even if there was nothing outright fantastic.

Ultimately, while the beginning of the story was frustrating, and more than a few plot developments relied on contrivances and miraculous coincidences, Jellicoe Road is an enjoyable and emotionally rewarding story that successfully juggles different timelines, numerous subplots, and a sweet and surprisingly passionate romance.
B+