"I Now Pronounce You Someone Else," by Erin McCahan 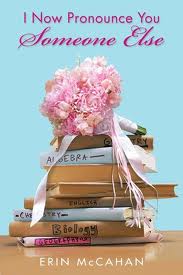 The Protagonist: Bronwen Alexis Oliver. An energetic and expressive brown-haired high school senior who can't understand how she came from such a wacky blond family.
Her Angst: When her boyfriend proposes, she has the chance to belong to a "real" family that believes in her - but how will this affect her future, her college education and her prospective career?

Jared Sondervan: Bronwen's boyfriend and then fiance. Super-sweet guy. Likes to come up with jokes. Has a great family AND a bitchin' beach cottage. Kind of hasty with his life-changing decisions.

Whitt: Bronwen's stepfather. Loving and supportive, but he's let down Bronwen once before - can she trust him again?

Mrs. Andrews VanHorn: Bronwen's mother, who is so AWFUL HORRIBLE TERRIBLE BAD that I don't want to waste any time re-reading her scenes to find out what her actual first name is.

Laurie: Jared's sister, who is also getting married - very welcoming, but also willing to dole out some hard truths about what marriage really entails.

Angst Checklist:
The Word: 18-year-old Bronwen likes to pretend she was switched at birth - a very Anne-Shirley-esque trait. She is artistic and expressive and brunette - while the members of her family (particularly her mother) are blond, superficial and strictly polite. She and her mother have never seen eye to eye, and while she likes her stepfather, Whitt, she has issues with him that keep her at a distance. For years, she preferred to imagine that her "Real" non-crazy brunette family (whom she dubbed the Lilywhites) would eventually come and take her away and leave a perfect, blond homecoming queen in her place for her mother to fawn over.

Then she meets Jared Sondervan, an old classmate of her brother's. He's sweet and romantic and considerate - but not only that, he comes from a big, noisy, loving family who quickly accept her as one of their own. At last, Bronwen finds people who understand her, who aren't afraid to express their emotions and ideas and listen to hers in turn. So, after months of blissful romance, when Jared asks Bronwen to marry him, she says yes.

I Now Pronounce You Someone Else starts out light and bouncy. The story is told entirely from Bronwen's POV and she has a hilarious, relatable voice. She's more than just a teenage snark machine, however, and her characterization deepens the more we move forward and learn about her personal disappointments.

More than anything, Bronwen longs for an identity - and for most of the novel she believes that who she is depends on other people. She doesn't just want to be, she wants to belong. It's the reasoning behind her daydream of being rescued by her "real" family from her vain, appallingly selfish mother. It's the motivation for her hasty engagement to Jared - where, she believes, she'll finally belong as a wife and a daughter- and sister-in-law to the supportive Sondervans.

However, as the date draws nearer and nearer and the stress piles up, Bronwen will have to decide - is she willing to sacrifice all that she could become on her own in order to belong to a family right away, or should she work more towards discovering who she is as a Me before jumping into being an Us, but risk doing so alone?

Bronwen's story is supported by a strong cast of secondary characters - particularly Jared, who is an absolute sweetheart. You couldn't ask for a nicer guy - but the author also does an excellent job demonstrating how he's not a good enough reason for marriage after one's barely graduated from high school. Bronwen's mother, despite how SERIOUSLY AWFUL a person she is (wait until the end!), is also well-depicted. She's not Disney-Villainess evil - she's just monumentally self-centred and oblivious. She's all the more horrible because you know that there are people out there, mothers out there, who are probably exactly like this.

Another thing that impressed me with the storytelling is that while the novel ends with the heroine's main issue resolved, it doesn't magically clean up everything in Bronwen's life. For instance, scales don't magically fall from her mother's eyes, bringing on an "I always loved you" moment of familial bliss. And Bronwen doesn't completely heal all of her fractured friendships. I appreciated that - too many stories (not just YA!) have endings that work like a positive domino effect - once the main issue is resolved, all the other little problems and issues are magically resolved as well.

As to the writing style, it's funny - although, at times, the style is so quirky (sometimes just for the hell of it) that I discovered my eyes skimmed over certain passages just on instinct, searching through the jokesy wordplay for an actual point. There were also a few moments where I was confused about the temporal placement of the narrator - sometimes it seemed like Bronwen was narrating from the here and now, and at other times she made allusions that suggested she was speaking from some future date - and if so, why was she narrating? And why from that specific point?

As it is, I Now Pronounce You Someone Else is a solidly enjoyable, well-paced and -characterized YA novel with a witty and engaging narrator.


You can purchase I Now Pronounce You Someone Else here!